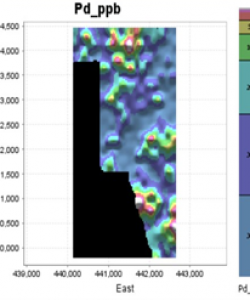 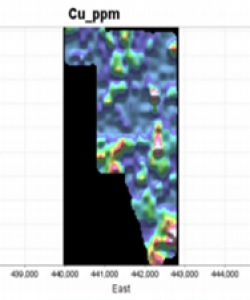 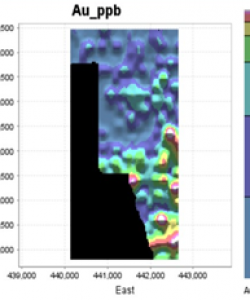 The recent discovery of Nickel (Ni) Copper (Cu) and Platinum Group Elements (PGE) in sulphide mineralisation at Chalice Gold Mines’ Julimar project (announced in March 2020), as well as indications of other instances of similar mineralisation discovered by other explorers within the Jimperding Metamorphic Belt, serve to highlight the great potential of this geological terrain

The coincidence of base metal and PGE geochemical anomalies from the BRL vacuum drilling with the Coates Mafic Complex is most encouraging from an exploration point of view.  By analogy the mineralisation at Chalice’s Gonneville Prospect is characterised by a similar Cu-Ni-Co-PGE elemental association with a mafic intrusive complex.

There are a number of interpreted mafic-ultramafic units that have been identified in the region, all of which show geophysical similarities with the Julimar Complex and consequently all represent targets for Cu-Ni-Co-PGE mineralisation.

Outcrop in the area is poor and interpretation of the mafic-ultramafic layered intrusive complexes is based on the regional aeromagnetic data.  Following the experience of Chalice, the targets within the interpreted mafic-ultramafic complexes are identified by airborne electromagnetic (EM) surveys then followed-up by drilling.

The land title situation in the project area contains both freehold private land and conservation areas.  Statutory approvals for ground access within the granted tenements will be necessary prior to commencing field work that involves ground disturbance activities.

Initially helicopter-borne EM surveys such as VTEM can be flown to identify targets for follow-up work.  These surveys are usually sufficiently sensitive to pinpoint anomalies to the extent that further ground-based EM is not required.  The previous analysis of bottom-of-hole vacuum drill samples has been shown to be effective and this can be extended over the project area here access has been obtained.

The Coates Ni-Cu-Co-PGE Project, with an area of 47.3 km2, is located in the northern part of the South West Greenstone terrane of the Yilgarn Craton.  The Project covers the Coates Mafic Complex within the Jimperding Metamorphic Belt and comprises various gneisses and banded-iron formation, interleaved with ultramafic intrusive units that have been repeatedly deformed, metamorphosed and intruded by granite.

The regional geological setting of the Coates Ni-Cu-Co-PGE Project has been highlighted by the Julimar Project being explored by Chalice.  Chalice commenced a greenfield exploration program in mid-2019 for high-grade Ni-Cu-Co-PGE mineralisation in the region and interpreted the presence of an unrecognised layered mafic-ultramafic intrusive complex at Julimar based on high resolution regional magnetics.  Follow-up exploration identified the Julimar (mafic-ultramafic layered intrusive) Complex that extends over a strike length of approximately 26 km, which has been confirmed by drilling to be highly prospective for Ni, Cu and PGEs.

On the local scale, the Coates Mafic Complex is a magnetite gabbro intrusion into granitic rocks that hosts the Coates vanadium deposit.  Lenticular magnetite has formed at the core of the layered Coates Mafic Complex between two granitic bodies (Baxter, 1978).  The deposit was discovered 1961 and explored in the late 1970s by Garrick Agnew Pty Ltd (1971).  Mining started in 1980 only to cease operations a year later due to high silica contents limiting production.

Previous mineral exploration in the area has predominantly been focussed on the Coates vanadium deposit (Coates) or bauxite.  There has been very little exploration for other metals and only minor gold occurrences are located at Jimperding Hill to the north of the project area and unnamed occurrences to the southwest.

In 2011 Mercator (Paton, 2011) explored E70/2230 for vanadium, base metals and PGEs using lag sampling, focused mainly on pisolitic laterite. Orientation sampling of mineralisation adjacent to the Coates Siding vanadium deposit was applied to regional surface geochemistry and successfully located vanadium anomalies in laterites approximately 3 km east of the Coates Siding deposit. In February 2011 Mercator and BRL entered into a joint venture agreement over E70/2230 which gave BRL rights to Bauxite within the tenement [3] . In 2013 BRL completed an extensive vacuum drilling programme at two bauxite prospects, Fortuna and Fortuna North (Menzies 2014). While bauxite was being targeted at the time, 520 end-of-hole samples were also analysed for As, Cu, V, Zn, Pb, Ag by ICP techniques and Au, Pd, and Pt by fire assay on the same samples. Mercator subsequently obtained a total of 950 assay pulps from bottom of hole samples from the bauxite exploration drilling and analysed the samples using a hand-held portable XRF (Cahill, 2015). Retention licence R70/59 covers the Fortuna bauxite prospect.

Plotting the distribution of geochemical assay results show co-incident base metal anomalism (Ni, Cu, & Cr) with PGEs (Pt max 37 ppb, Pd max 53 ppb & Au max 108 ppb) along the western edge of the Coates Intrusion. The coincidence of the Cu and PGEs anomalies is significant as these elements have long been considered geochemical pathfinder elements for nickel sulphide mineralisation. The distribution of Cu, Au, Pt & Pd are shown below

[3] BRL and the rights to Bauxite were subsequently acquired by Yankuang Resources Pty Ltd.